Hey all Son of Adam here with a quick tip about tipping the favor of combat.  This technique is a very particular one, but it can be shaped to good effect against most non-fearless armies; it’s called the tag-team.  Please keep in mind that this technique cannot be used in every circumstance, but when it can be used, it can be the shift in power during a game.

Once in the last round of a tournament, I was facing a horde ork army with a full sized nob biker unit.  There was nothing in my army that could have faced that unit head on and my opponent knew it.  He stretched the squad out across the board so that no matter where I went in my turn he would be close enough to engage me.  I was stuck in a hard place and had to employ the tag-team.

I happened to get the rule book power terrify (it relieves a unit of the fearless special rule) and I used it on his nob bikers (keep in mind this tactic can only be used on non-fearless units).  I moved up my combat unit and did not shoot in order to keep the formations that he had put out in place.  Then I multi-assaulted his strung out nobs squad (big scary unit) and tag-teamed his boys squad (an easily killable unit).  I used my movement in such a way to make sure that nearly all of the combat squad could only get in on the boys squad and I dumped nearly all of my attacks into it.  During his reaction most of his nob squad was too far away to fight, and most of the boys were dead.

For combat resolution I had killed enough of the boys that his biker squad was taking its leadership test on a two.  Even with the re-roll they failed, and since the boys were still big enough to be fearless I couldn’t pursue them.  The Nobs with both warbosses rolled their three dice and fled off the table.

That is the tag-team.  In these pictures you can see how the eldar jetbikes are facing off against a paladin squad.  During their movement they position themselves in a place where they can declare the convenient rhino as their primary target and the paladins as the secondary. 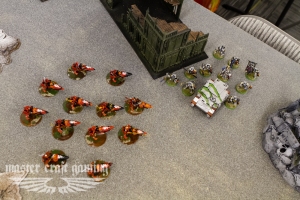 After they charge they dump all of their attacks into the rhino and only one of the warlocks hits the paladins.  Since in sixth edition all damages against a tank count towards combat resolution the paladins end up loosing combat by enough to make them test on double ones.

They fail their leadership and if the bikes roll low enough to catch them, then the paladins will break and run off the table. 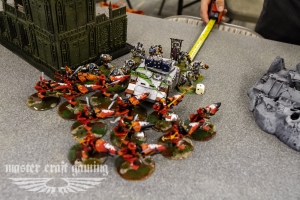 This is very situational, and it’s not a guarantee, but if you find the opportunity, try it.  You can help push favor of combat towards your units if you can find a way to push the combat resolution to 9+ on your side.  Good luck all.