GT Victories for the Eldar

Hey all Son of Adam here again.  I have been off the blogging scene for a while and, with some technical errors and time requirements have not produced any visual content for you all.  However, my hobby has continued on and, at the request of a fellow hobbyist, I have decided to update you on some of the tournament success that I have been able to achieve during my absence from the virtual world.

I have participated in several tournaments during this time, made a few guest appearances on 11th company podcasts, and started a new army.  However, I will only discuss two GTs that I have attended in this post.

The first of which was the Battle for Salvation GT up in New York.  This was a 60 some person tournament, for six rounds, over the course of two days.  I brought a similar Eldar/Dark Eldar list as I brought to NOVA.  It had:

Aegis defense line with a quad-gun

I had a great time at this event, with all thanks to the Battle for Salvation gaming club for putting it on.  For the first round I played against a fella named James, who has a blog which can be found here.  James was running a mix between horde orks, battlewagons, and dakka jets.  James was a great sport and a fun guy to play against.  I tried to pull off some Eldar shenanigans and the dice weren’t with me.  Eventually boyz overwhelmed my council and I was left with my weak troops, and the dark eldar.  I was able to maintain points and stay alive long enough to make it a very close game.  In the end I was able to win on KP’s while almost being tabled.

The second round was against a great player, and accomplished GT winner, Nick N.  (I don’t know how to spell his last name and would like not to butcher it here in any attempt to recreate it).  Nick’s army was a very sound Tyranid list with a lot of monstrous creatures and lots of guants.  He was also running several squads of zoanthropes for psychic powers.  My advantage was in the ever humble runes of warding.  After hurting many of his models from perils Nick ended up giving up on the effort to cast powers and played the army straight.  After the council lost combat one round, it broke.  This ended up in the end giving me the win as I was able to regroup in my turn and get a round of shooting off that crippled his army.  In the end Nick played a great game but I was able to get the win.

The third round was against a very similar Tyranid army as played by the NOVA commander himself, Mike Brandt.  In this mission I gave Mike first turn and after he deployed laterally, I refuse flank deployed and was able to isolate half of his army simply with range.  I used my full force on a limited amount of his, and I was in the end just able to get to some objectives to claim the victory.  Mike was very sporting about it, and had a very nicely painted and presented army.  As a sign of good sportsmanship he gave me a KR Multi-case dice tray (which I still use, thanks by the way).

The fourth round was against a nice fella from CT (my apologies, it has been quite a while and I have forgotten his name).  The mission was objectives and he was playing my armies hard counter, old demons.  I bundled up in the corner of the table and tried to castle in such a way as to deny as much of the incoming damage as I could.  However, his forces proved too strong.  Too much damage was done by his alpha strike for me to deal out enough to stay alive.  After some fighting I lost the castle.  However, the council was able to manipulate the table enough to get some positioning, and I was able to tie on KPs, tie on table quarters, and then win by a small margin on objectives.

The fifth match was against a Necron/ Grey Knight list, as piloted by Eric Hoeger.  Eric and I have met a few times now at the tournament scene and every match has been a challenge.  We have grown to respect and appreciate each other’s ability.  In this match I was able to keep mobility on Eric and win on table quarters.  He deep struck a full squad of wraiths in front of my Warriors squad, and I was able to kill enough of them to deny them any effect in the game, and his other full squad of wraith scattered and misshaped to their deaths.  With the extra weight of my army I was able to defensively lean on Eric and pull out the win.

The sixth and final match was on table one against Team America’s own, Andrew Gonyo.  He was running a GK/Guard mix, and a very shooty one at that.  Andrew went first and shot 6 or so pysbolt razorbacks into my council before I could get fortune up and dropped 4 or so.  In my turn I was able to put a bunch of rending wounds on his dreadknight, which he managed not to take any wounds from.  At that point the game was near its end.  Andrew was able to take the extra weight he had and lean on me for the rest of the game.  I tried some risky maneuvers and was able to, with Eldar shenanigans, cut down his blob squad and contest a bunch of objectives.  But, in the end, sound play and some good fortune won the day for Andrew.

I was able to win second to one at this GT and won a very fancy cup trophy. 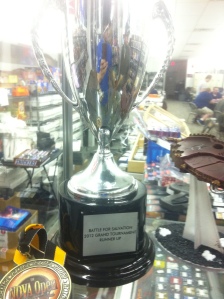 The second GT that I want to more quickly review is the Saint Valentine’s Day Massacre GT.  This GT had 42 players and ran 5 rounds over the course of two days.  This was a very fun event, with free food all day, and some great looking trophies.

I was taking a new Eldar/IG army, which had an IG blob with two Demolishers to compliment my Eldar force.  The first game I played was against a fella named Tim with Sisters and Palladins.  He shot down a bunch of my council, which caused me to retreat.  Fortunately I was able to wipe his paladins with my demolishers and keep my distance from his guns in order to get more KP’s and win the match.

The second match was against a nice Beltway Gamer name Duncan.  He was sporting a very shooty Space Wolves army.  In this match I was able to tie up or kill all of his scoring units with the council and kept the objectives open for my mobile scoring units in order to get the win.

The third match was against an Ork/IG army general led by a fella name Paul.  In this match I used a sort of refuse flank deployment in order to bait Paul towards my council long enough to fly them away to the other side of the table.  With this I was able to apply all of my force on half of his in order to win on victory points.

The forth match was against the same James that I play first round at BFS.  He was running a fast assault Chaos list with Ork allies.  In this match I was able to pull off more Eldar shenanigans to get a tag-team combat and kill his spawn squad with typhus.  I was then able to lean on him with the extra weight to win the objective.

The last match was a rematch of the same event the year before, and it was against none other than my rival, Eric Hoeger (Yes the same guy as in the semi-finals of BFS).  Eric was running a similar list to James, but it was pure Chaos.  This match was the relic, and Eric grabbed it first as he had first turn.  I shot his unit down, but couldn’t grab the relic.  He then charged my council with nearly his entire army.  He was also able to pick up the relic with some plague marines and charge in as well.  For the next 5 turns or so, I sent all of my spare precision strikes into the one guy holding the relic.  Eventually he died and dropped it.  The game ended with a tie on the primary, while I won on the secondary.

That gave me first place at this GT and a really fancy trophy.

Thanks for reading guys, I hope you enjoyed.  If you have any comments, or anything that you would like to hear some strategy about post below.  If I have the time I will respond, or create a post to respond to your questions.