Hey guys, Son of Adam here from MasterCraft Gaming with a quick discussion about a potential list element for the Grey Knights.  Some people have been requesting more Grey Knights tactica, and Vanguard thought that I should post up a discussion that we had about them, and so, here you go.

Let’s take a quick step back and explain something simple, but useful (and often overlooked).  Some effects in 40k multiply their effectiveness.  They offer a buff at a flat cost that a varying number of models can take advantage of, depending on the list created.  A squad purchasing psybolt amo is a good example, or Black Templar’s creeds.  The buff that is given becomes less and less expensive (per model) as it is spread across more models that are taking advantage of it, and therefore increases its efficiency. 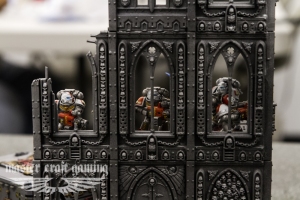 4 to 5 twin-linked psycannons is no small thing.

And now the next step: Grey Knights now have access to the divination psychic discipline and with it, the incredibly helpful primaris power prescience.  Prescience, unlike most powers, is guaranteed.  It is also one of the multiplying effects that we just talked about.  When applied in bulk the relative cost drops.  –As a side note, please be aware that lowering cost is only a tool, it is not the aim, and the aim, if you haven’t read it yet, can be found here.–

One of the prime examples to look at is a squad of 10 Paladins/purifiers with 4 psycannons.  (Which can be combat squaded to leave the cannons together and make the other half combat related or serve some other function.)  How much would you expect to pay in order to twin-link all of your psycannons and bring a chaplain with you whose power is in effect every turn, and not just on the turn you charged?  Some may say just make the cannons mastercrafted and ignore the bonus to combat, after all they generally only miss about once per shooting phase anyway.  Normally I would validate that opinion, however, with the advent of fliers and flying MCs, the ability for paladins as characters to make precision shots, and the bump to the amount of infantry we expect, I would have to make the argument again.  What is the value of a squad being able to re-roll all missed to hits in both shooting and in combat?  Quite high I expect.

Before we get too far let’s look at who can get prescience and evaluate their usefulness in furthering our ability to achieve the golden rules.  As per Grey Knight FAQ, only the inquisitors and librarians get rulebook powers.  Here are two quick (and not exclusive) things to note about their differences.

Always remember killing is not the goal, but a squad like this is something that a list can be built around.  You can tactically achieve a 24″ threat range that people will not want to be in.  When you have something like that, you can then build a list around it that can use that bubble to manipulate your opponent’s movement, and put them in places that are more advantageous to the rest of your list.

That’s just a quick little thought for all of you MasterCraft fans who play Grey Knights (this is also useful for other armies).  Find ways that you can build lists with something that has this kind of influence, and then comment with how that went.

As always fellas, thanks for reading.  Please follow/like/sub our stuff and leave some comments if there is anything else you want to see or see changed.  Thanks.