Hey all Son of Adam here again with another tournament review.  This weekend I played in a tournament, and with some suggestions from comments and friends of mine I came up with the worst list from my painted models.  It was time to troll.

The tournament this weekend was at Alternate Universe in Blue Bell PA.  This was their 1750 anniversary tournament and was tons of fun.  The crew there always has a good time and is always made up of very friendly players.

HQ: Lord Commissar with a power sword (no fist, or axe) in a chimera

Elites: 3 Ogryns in a chimera

I’m not trying to say that anything in here is inherently unplayable, but I do want to point out that these were the worst models that I had painted for these two forces.  Some of these are pretty funny and are very rarely used in the competitive scene.  By suggestion I took tau/guard with as many lightly armored transports as possible because of how bad they got.  I added in a squad of ogryns, and a penal legion squad as they are often the least used troops choice in the IG codex.  I made sure that my Lord Commissar had no weapons of relative use, and was in his own dedicated transport.  All in all I think that the best thing in the army was the aegis line, and I wouldn’t have taken it if I found my ethereal in time.

So for the first match I played against a very balanced Space Marine army with 3 tac squads, a scout squad, a chapter master, a chaplain, 10 man terminator squad, a whirlwind, and a large dev squad.  The mission was a modified VP mission, wherein there was a neutral model that counted as a flying MC that moved in a random direction each turn and was worth 4 VPs.  My opponent rolled for the random direction on the first turn and sent the bird into my quarter.  After that I spent two full turns shooting it down.

He then deep struck his termies w/Chaplain in front of my lines and I shot down half of them while bubble wrapping everything with the kroot for the counter charge.  In his turn the scouts outflanked and his termies ran through the kroot.  I finished off the rest of the termies and shot down the rest of the scouts.  At that my opponent forfeits.  I had a win with a bunch of luck.  If my opponent had rolled for the bird to fly into his quarter it would have been much different.

In the second game I played against my friend TJ’s Grey Knights.  He was running a grand master with two 10 man termi squads, one 10 man strike squad, a storm raven, and an aegis with a quad-gun.  Our mission was 6 objectives with the Big Guns never tire rule.  We started off in Dawn of War deployment and he won the first turn.  He set up by combat-squading the strikes to hold two different objectives, putting one 10 man in the middle of the field and combat-squading the other, placing half of it in the raven.  On my side I split castled.  Some of my stuff went on my far left flank and some on the far right with everything else in reserve and the Crisis suits deep striking.

I shot down his quad-gun, and put some wounds on both strike squads and one of the termie squads.  He spent his first few turns moving up and running.  The suits deep struck next to the strikes in the aegis and flame/plasma’d them all down with the grand master.  (Allocating the wound pool is great for the shooter now).  The rest of my left flank shot down his other strike squad.

In TJ’s next turn the raven came on and put some pain on the suits and his center 10 man backtracked and went after them as well.  The other five man moved forward to get to a middle objective.  In my turn the kroot outflanked onto the now vacant objective on my left side and the stealth suits on my right to support the crisis suits.  I dropped the 5 man termie squad and moved into an advantageous position with the suits.  TJ brought the raven down and charged my suits and wiped them.  Then in my turn I brought the ogryns forward and all of my transports marched together across the field.  In the last turn of the game I tank shocked his termie squad out of position and then charged them with the two ogryns I had left.  Because he was out of position from the tank shock, I was able to charge one hammer-termie and kill him in combat, while the rest of the squad couldn’t get back in and won (with two ogryns against a 10 man GK termie squad) simply because of the tank shock placement.  The game ended and I had more objectives than TJ did to get the win.  That put me at 2-0 and on the top table for the last round. 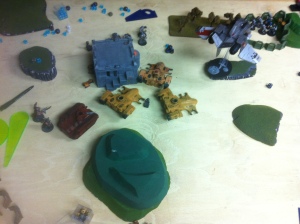 In game three I played Frank with his Demons/IG list (for those of you who remember, I played against Frank at the Stomping Grounds tournament in the last round as well.  This was the modified list that he brought with him to NOVA).  He had a blob squad, a command squad, three valks with two vets and a platoon command in them, a large squad of screamers, 3 man flamers, and two big flying MCs.  Our mission was three objectives with one in each zone and the third in the neutral zone with a vanguard deployment.  Frank castled with his guard and I castled on the exact opposite side.  Frank got first turn and got his preferred wave.  He dropped both MCs in my front line with the screamers and the rest of his army was out of range for everything else.  I brought all of my guns to bear and pulled one MC out of the sky, but couldn’t kill him.  In his turn one of the MCs charged the ogryns and the other flew forward to get position.  His flamers came down and finished off my pathfinders.  In combat the ogryns stuck it out.

For my turn the suits deep-struck behind his guard lines, but even with the re-roll they mis-hap’d and Frank placed them near the screamers.  I was able to shoot down the other MC and stuck it out in combat again.  On his side the screamers jumped over to the middle objective and his flamers blew up a d-fish.  In combat his mc had one wound left and I had one wound left on two different ogryns.  On my side I brought the kroot and the stealth up on the middle objective (I had cleverly placed it in the back corner near my side to limit his mobility and utilize my own).  The penal legion charged into the MC and the rest of the army shot down the screamers and flamers.  In combat I finished off the MC and he killed off all but one wound of one ogryn.  His valks came in and shot down all but the commander suit with their las.  For the final turn my gun drones split off.  I was able to shoot down two different valks and charge the remains with drones to kill them off (super-drones they are always under-rated).  Then the stealth suits jumped up and charged the remaining valk, which had gone into hover mode for the maneuverability in order to put himself into position for the objective.  However, the suits were able to immobilize it.  The game ended and I was able to hold two objectives to his one in order to win the game.

All in all I ended up with three wins, with an ok painted trolling army, and managed to pull out best sportsman (which they passed on being that I won best overall).  There was some luck involved, particularly in the first game with the random direction of the bird, but I feel like solid play was what allowed me to win out over the rest.  My opponents were great guys and we all had some fun with these matches.

My thanks to the guys at Alternate Universe and especially to Jack, who has been putting on these tournaments for four years now.  Well done all.