Hey all Son of Adam here with another Tournament Review.  This weekend Vanguard and I went to a Feast of Blades qualifier at Showcase Comics in Media PA.  For those of you who don’t know about Feast of Blades here is a link to their site.

This was a qualifying round for Feast of Blades and we were all playing for a chance to play in Denver this October.  Feast of Blades is a 2k, non-mysterious object/terrain, non-warlord, non-double org tournament.  Your score is based on a painting , sportsmanship , and a battle point system including primary and secondary objectives, with battle point modifiers.

This will be a quick recap again.  (Sorry I will be very hard pressed to get much done this week).  This tournament I took my eldar again –see earlier tournament reviews for its contents-, as I am trying to get some more reps in before NOVA.  I added a squad of kabalite warriors this time for allies just to try them out. 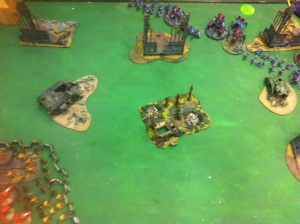 In my first match I played a nice fella named Joel and his Tyranids.  Joel was newer to 6th ed and wasn’t able to play with his primary army because it wasn’t fully painted.  His nids however were very nicely done.  His army had a flying tyrant, a harpe, two tervigons, some zoans, some devilguants, and some hive guard. 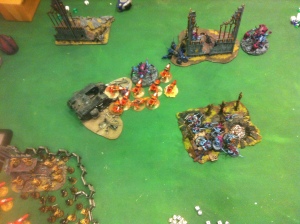 This match was Primary: Kill Points, Secondary: Table Quarters with a vanguard deployment.  I castled up in the corner and covered up with the council.  Joel lined up everything as far forward as he could.  I then isolated his fliers and removed them.  After his fliers were down I was able to piecemeal the rest as it was all on foot and struggled to engage me at the same time.  I ended up with a win in this first match.

For the second game I plated against Matt from Stomping Grounds with his drop pod Space Wolves (actually did a battle report with this same army not too long ago).  This mission was P: Quarters, S: Objectives with a Dawn of War deployment.  This was a very close match.  I failed a lot of saves early and the game only ended up going 5 turns.  For this match I again tried to castle while infiltrating my snipers some.  He lined his zone with long fangs and dropped everything right on top of my lines.  If the game had gone on Matt would have been in a very good position to take it from me.  However, in the end I was able to claim more table quarters and objectives to win the game.

The last match I played against a fairly similar list.  Walter brought Dark Eldar with Eldar allies.  He included three fliers, harliquins, an autarch, some scorges, the baron w/ hellions, some trueblood venoms, and two squads of pathfinders.  The mission was P: Objectives, S: Kill Points with a vanguard deployment.

This was a tricky match.  I had no answer to his fliers and they did tons of damage.  In this match I spread out my deployment and he reserved a good portion of his force.  Walter was winning the battle of attrition in the first few turns.  However with the turn of the battle, I ended up being able to weather the fire from his two fast squads as they alpha’d in from reserve, and take them out in my subsequent turn.   After that he still made a very solid effort and almost took the win from me, but I was able to hold on to enough objectives to take the game.

All in all, it was a good event (catered by Chick-fil-a).  A friend of mine (“That Guy” from the battle reports) ended up getting second next to me by one point.  It was a good day to mess around with a different rules/scoring set as per Feast of Blades guidelines, and helped get some practice games in just before the start of NOVA.

Thanks all for reading.  Sorry that this is so rushed, but I felt the need to get it out before I head down to VA.  Be sure to check out some of our other stuff and watch some of our batreps.